Do Super Bowl QBs get more babies named after them?

On Jan. 23, Sports Illustrated posted the following tweet, which got us thinking.

Fourteen years ago, a 7-year-old in Foxboro told Tom Brady he had named his baby brother after him. 'He was pretty young then. It’s probably something he hears once or twice a week now.' https://t.co/VDHRoyxxsQ

Just how many babies get named after Super Bowl-winning quarterbacks? If there are three things America loves, it’s the Super Bowl, quarterbacks and babies.

The U.S. government offers baby name data taken from Social Security applications, broken down by state and going back to 1901.

In Massachusetts, the name “Brady” appears in the data only four times prior to 1990, accounting for 35 applications. It appears every year from 1990 on, but was used only 153 times in the 1990s.

Below is a chart showing the usage of the names Thomas and Brady in Massachusetts since Tom Brady was drafted by the Patriots in the sixth round in 2000. For the purposes of these charts, we are labelling the years teams appeared in the Super Bowl. The Patriots appeared in XXXVI on Feb. 3, 2002 following the 2001 NFL season, so 2002 is the labelled year. 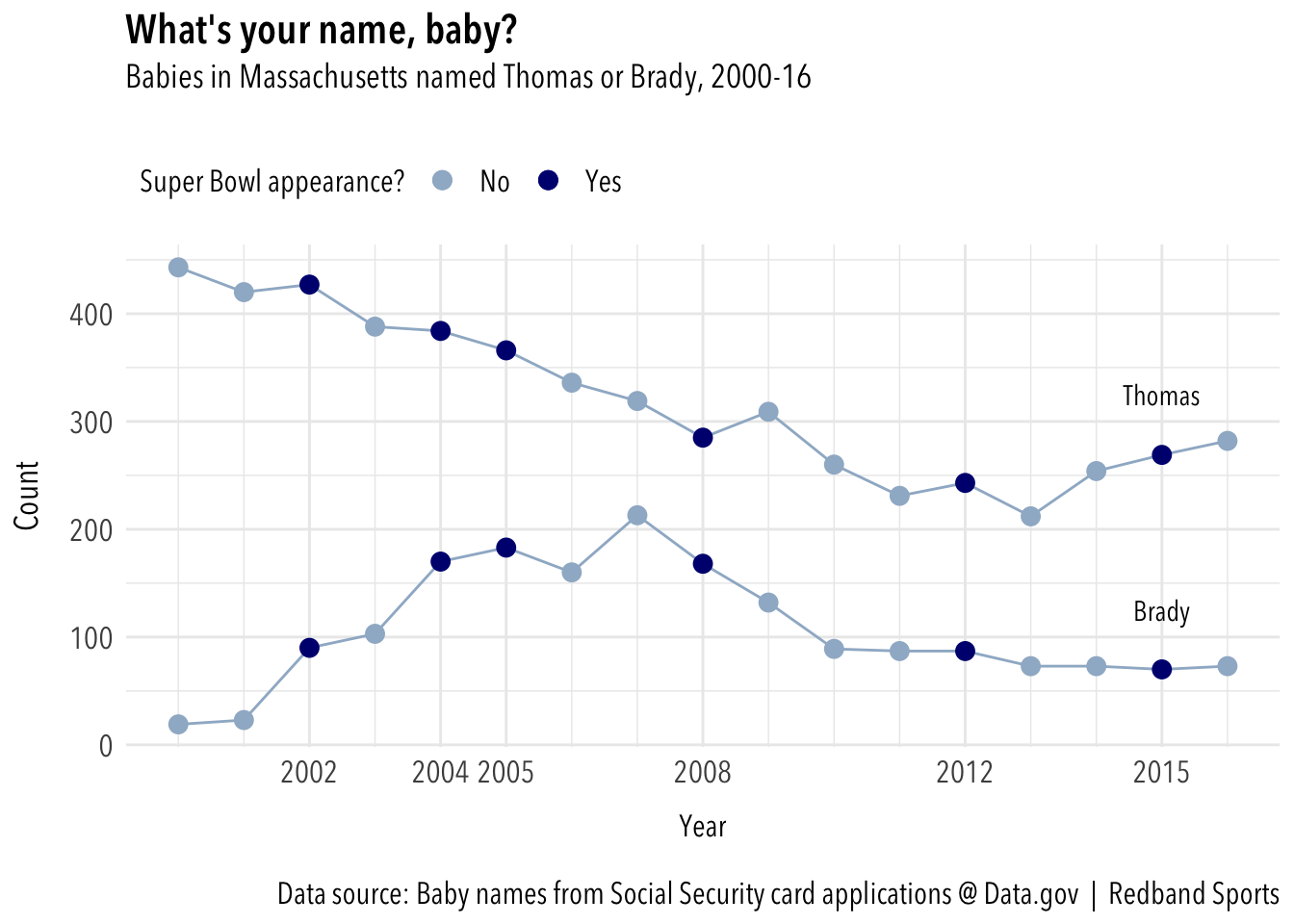 In 2007, the season the Patriots put together their undefeated regular season, the name Brady broke through the 200 level and was ranked 34th. This was the Brady heyday. It has been in decline since then, falling to 50th in 2008. By 2010, Brady was no longer in triple digits, and it has remained relatively static through 2016 regardless of the Patriots’ fortunes.

The name Thomas, however, has rebounded over the last three years available after a long, slow decline. It was the 17th-ranked name for boys in 2016.

Are we able to find similar results for other quarterback names in other states?

Looking at Bens and Benjamins in Pennsylvania has no value because the name is popular on its own.

Below is a chart for Russells in Washington state. 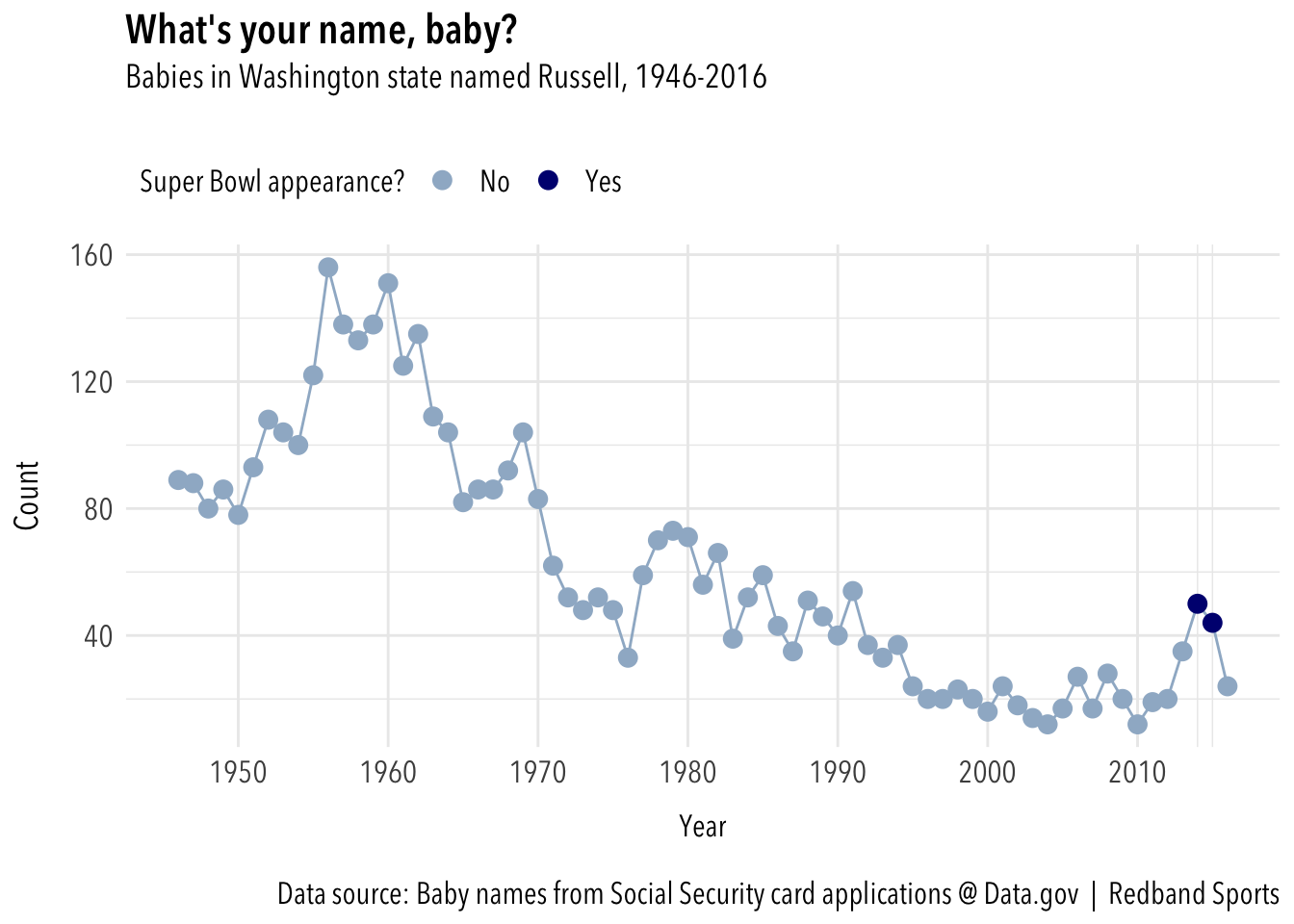 The name Russell reached its peak in Washington after the Second World War, but dwindled back into the 10s and 20s by the mid-1990s. But the name has enjoyed a modest renaissance, reaching 50 in 2014, the year Russell Wilson led the Seahawks to the win in Super Bowl XLVII against Denver. Another 44 boys received the name in 2015, showing prospective parents blamed Pete Carroll rather than Wilson for the interception at the goal line to end the game. 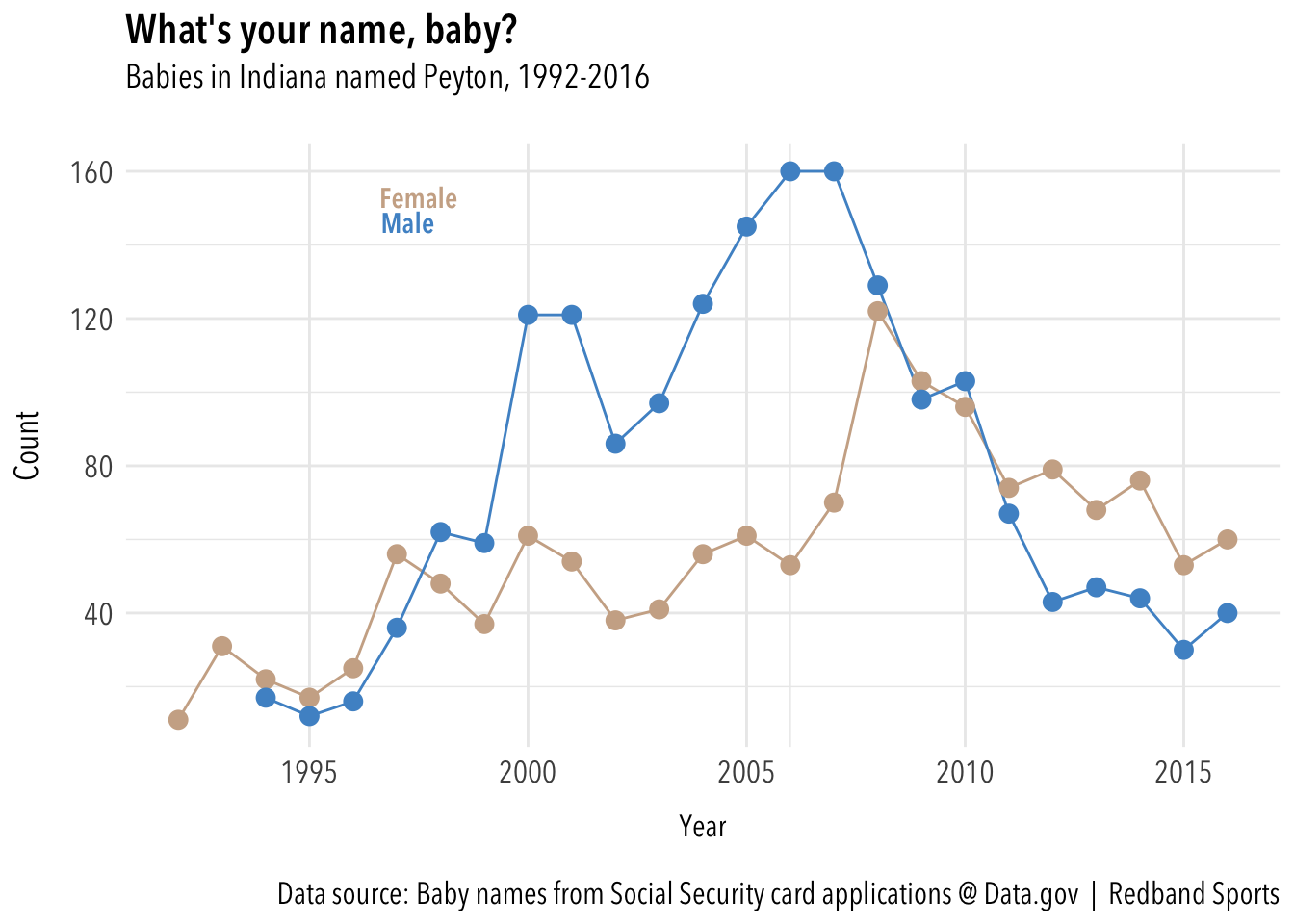 The name Peyton doesn’t even show up in the data until 1992 and it isn’t until 1998, the year Manning was drafted, that it becomes more common as a boy’s name. The usage for boys peaks in 2006, the year Manning led the Colts to their first Super Bowl victory since moving from Baltimore in 1984. Female Peytons outnumber males again starting in 2011, the year Manning sat out recovering from neck surgery before leaving the organization.

Now let’s look at whether Peyton became a thing in Colorado. 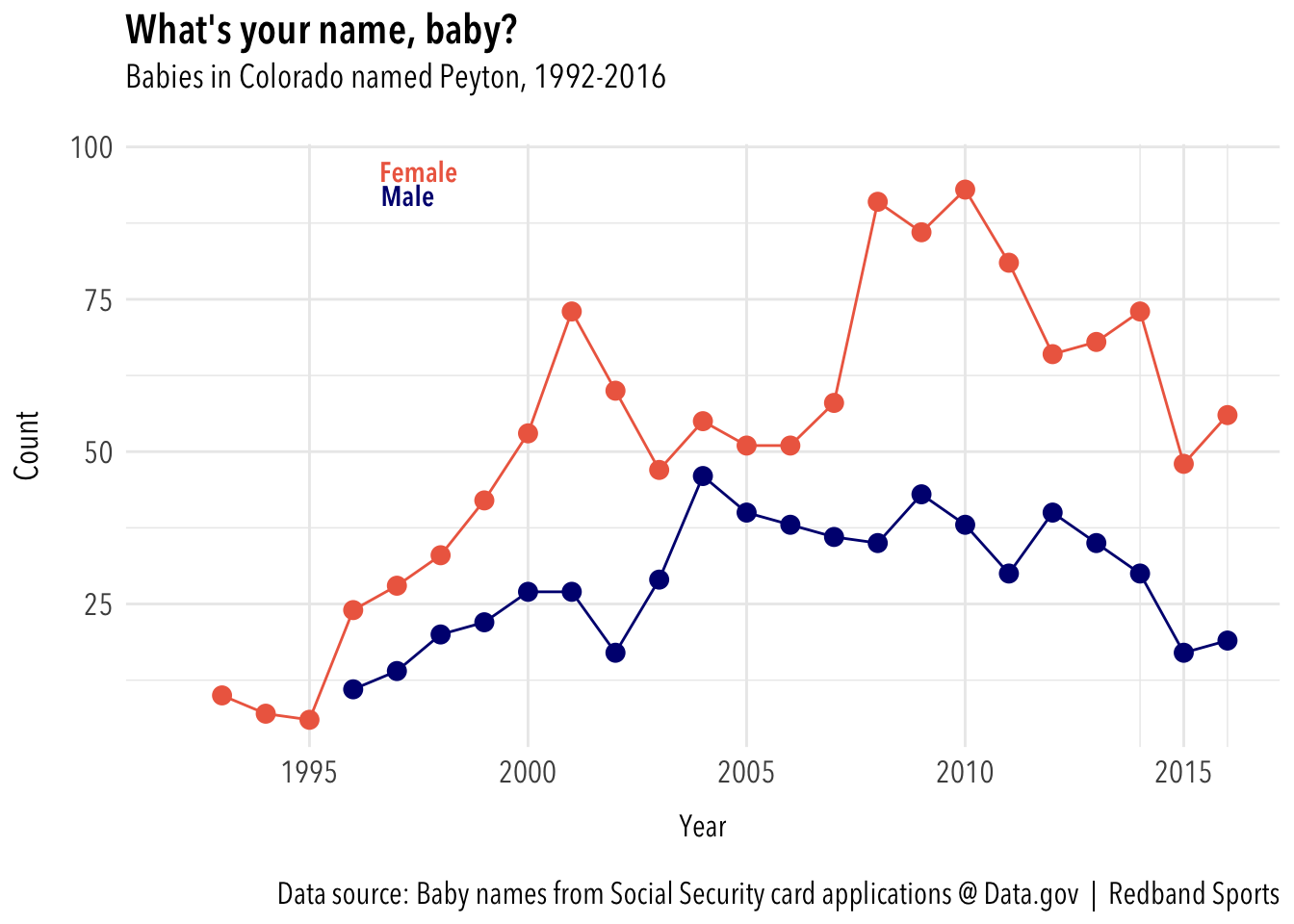 Now comes the quarterback with perhaps the most interesting effect on baby naming in two states. 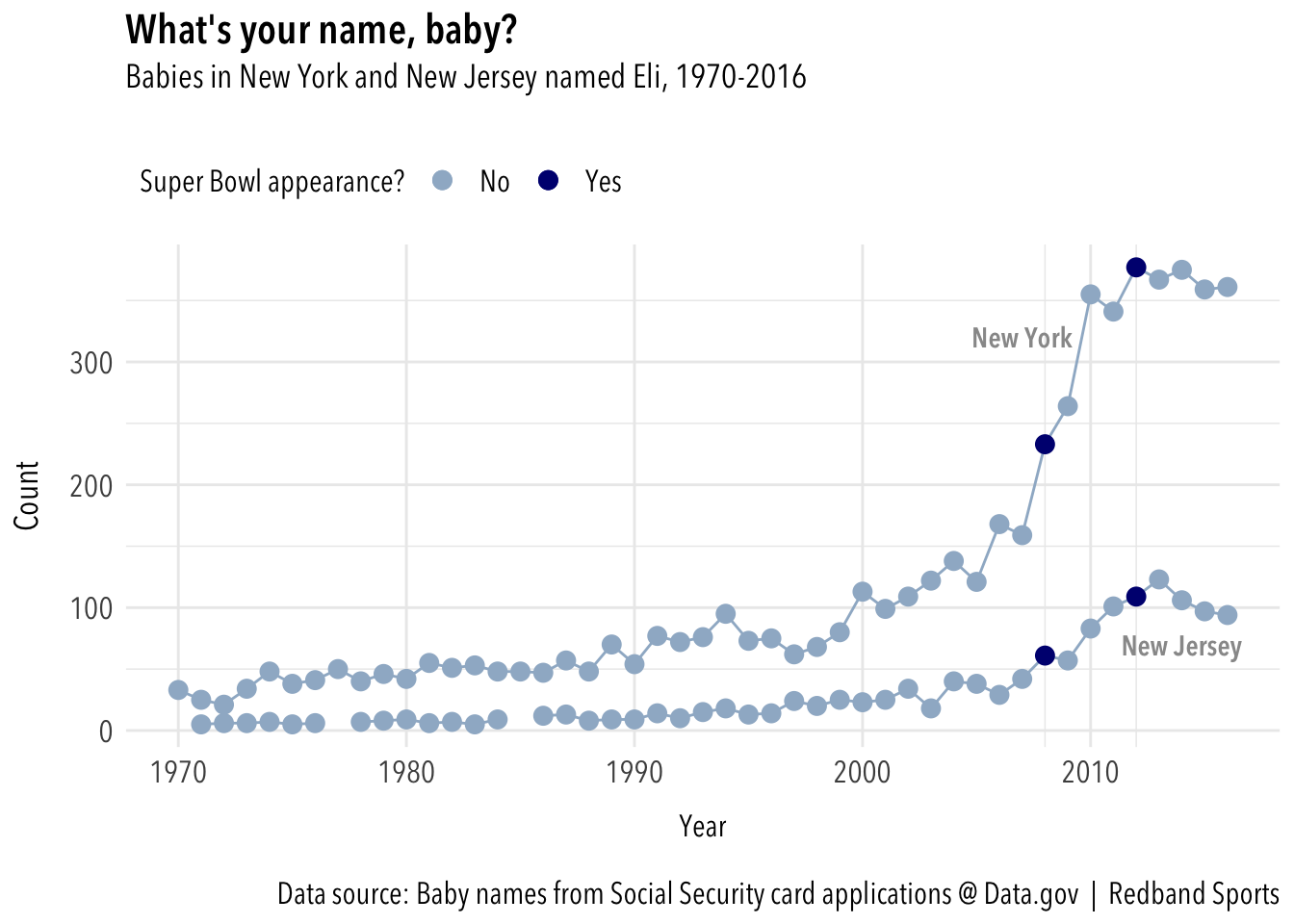 We limited the scope here just to the name Eli rather than extend it to other forms of the name. Elijah would be a more common long form, but Eli Manning’s given name is Elisha.

Eli receives a bit of a bump in New York state following Manning’s draft in 2004. It spikes in New York in 2006, the year of Manning’s first Super Bowl win. It continues to rise, though, which may indicate a general interest in the name apart from Manning. Or it could reflect the popularity of the Giants; it’s hard to tell.

We do see another rise following the 2012 Super Bowl win and continued strength of the name. But is it all Eli Manning? Or is it because many babies look like Eli Manning, sort of nondescript and mushy with strange expressions we can’t read?