A narrative being spun around Toronto is that Blue Jays ticket sales are weak this season because the current front office of president Mark Shapiro and general manager Ross Atkins are being too … something. It’s hard to pin down what the two executives have done wrong because the goal posts move a lot. Too conservative in their off-season moves. Not fan-friendly because the team increased ticket prices in the off-season. Too American. Too Cleveland.

It’s true that attendance was down sharply for the home series against the Chicago White Sox this week. None of the three games cracked 18,000 tickets sold. Although the New York Yankees series was well attended — acknowledging that weekend dates always do better and the series was likely buoyed by travelling Yankees fans — the narrative being pitched is that ticket sales looked to take a tumble this season because of Shapiro and Atkins and whatever their perceived failing is.

Without strong survey data that asks people why they haven’t buying tickets, observers are left to guess. But we do know some things and have data we can check. The 2015 playoff appearance meant people planned ahead to buy Blue Jays tickets for 2016. A second season of chasing the playoffs kept ticket sales strong. Back-to-back playoff appearances meant 2017 would be another strong attendance season.

But we can surmise that a losing season like the Jays suffered in 2017 would likely mean people wouldn’t be so eager to plan to attend games. And we can check to see whether this is a pattern that has held over time.

The Blue Jays have the benefit of not worrying about April weather. The complete SkyDome years — 1990 to 2017 — give us a clean set of data that doesn’t involve a drag on attendance because of inclement weather.

Based on the premise that the team’s performance in one season has an effect on April attendance in the following season, here’s what we see when we plot the April mean attendance of year n against the winning percentage of year n-1.

The line generated by the linear regression of these two variables has a p-value of 0.00821, well below the threshold of 0.05 that indicates statistical significance. The shaded area indicates a 95 per cent confidence range based on this out-of-the-box linear regression.

It’s not surprising to see April attendance in 2016 and 2017 land in the upper right with strong records from the previous season. The 1993 and 1994 seasons, following the Blue Jays’ two World Series championships and still lifted by the strong attendance the opening of SkyDome generated, anchor the top of the chart.

The regression would predict that after a season in which Toronto’s winning percentage was .469, we might expect an April mean attendance around 26,000. After only seven home dates, including the usual sellout on opening day, the Jays’ mean attendance is 28,556. We can expect that number to fall as the influence of opening day and the well-attended weekend Yankees series lessens as more home games are played this month.

Let’s look at the data another way. Let’s scale the previous season’s winning percentage and the April mean attendance to fall in the same range, with 100 as the midpoint. (It’s similar to how statistics such as OPS+ are calculated, where 100 is league average; the plus indicates the statistic has been scaled. In our case, winning percentage is scaled with a .500 record and with 32,500 fans represented at 100.)

Scaling the numbers allows us to plot the rises and falls on the same chart without altering the shape of the data. 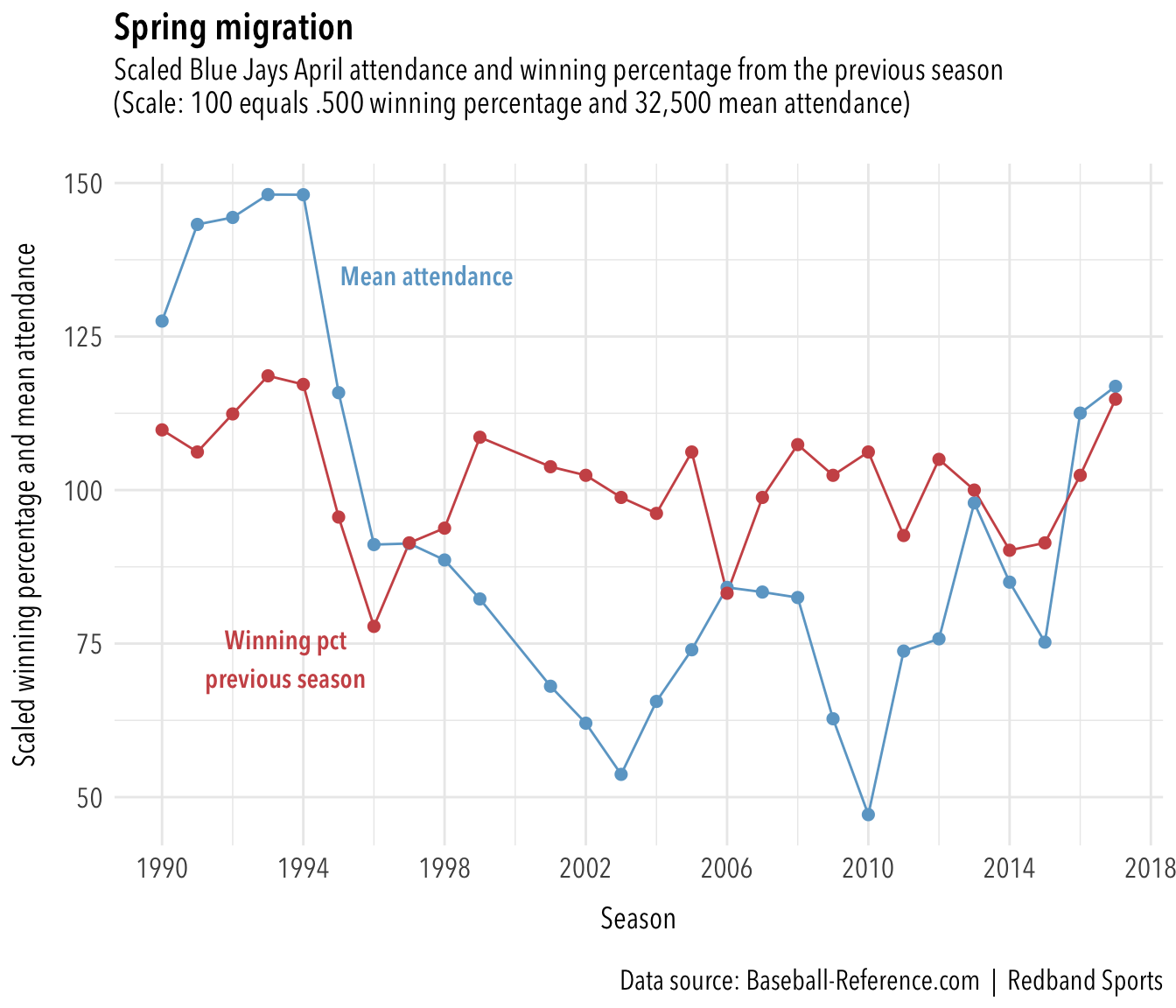 There appears to be a good relationship between the previous season’s record and April attendance. The lines rise and fall in tandem, with three exceptions. The two variables moved in opposite directions in in the late 1990s and in 2005. And in 2013 attendance spiked despite a losing record the season before. This coincides with the major off-season trades that brought R.A. Dickey, Mark Buehrle, Josh Johnson and Jose Reyes to the club.

Winning percentage from the previous season doesn’t explain every bit of variance in April attendance. And anger and frustration with the current management regime’s handling of club matters could explain why some people will stay away this year. The team’s four wins in the first seven games, erasing some lingering trepidation because of last season’s awful start, could also buoy attendance when the team returns from this nine-game road trip. Human behaviour is filled with variables. But cast a skeptical eye toward anyone who wants to say something other than wins and losses is the biggest variable in the behaviour of Blue Jays fans.