Doing a little light holiday data baking on Christmas Eve, I was surprised to learn that Goo Goo Dolls’ Better Days is considered a Christmas song, at least by the keepers of this list at Wikipedia.

The song, the first single off their eighth studio album Let Love In, was released as a single in September 2005 and made it to No. 36 on Billboard’s Hot 100 chart and to No. 5 on Nielsen’s Soundscan in Canada.

The video, shot at Malibu Creek State Park in California’s Santa Monica Mountains, has nary a Christmas accoutrement. No twinkling lights, no decorated coniferous trees, not even any “boxes wrapped in strings” as John Rzeznik sings in the first verse. It looks more like an episode of Sleepy Hollow.

The words do suggest an end-of-the-year reflection on the state of things, whether personal or about the world at large.

This whole dive was prompted by a tweet from Kaggle on Christmas Eve day highlighting a new dataset called “Billboard Top 100 Christmas Carol Dataset”. Its author, Sean Gilbert, said the data was a marriage of his Billboard chart data, which lists every song that appeared on the premier chart between 1958 and 2017, and the aforementioned Wikipedia list of Christmas songs.

I attempted to replicate his merge of the two files and came up with a slightly different final set, although the differences were mostly in the additional versions of songs called Amen in his list, not all of which were remakes of The Impressions’ original. (I reported this in the dataset’s Discussion page.)

In trying to reproduce the data, it appeared that he was limiting his data the times those songs charted in November, December, the obvious holiday months, and January, to capture any latent chart popularity.

As mentioned above, Better Days was released as a single on Sept. 20, 2005. Here’s a plot of its chart appearances (readers on mobile may have to flip their phones sideways to view the following charts and tables): 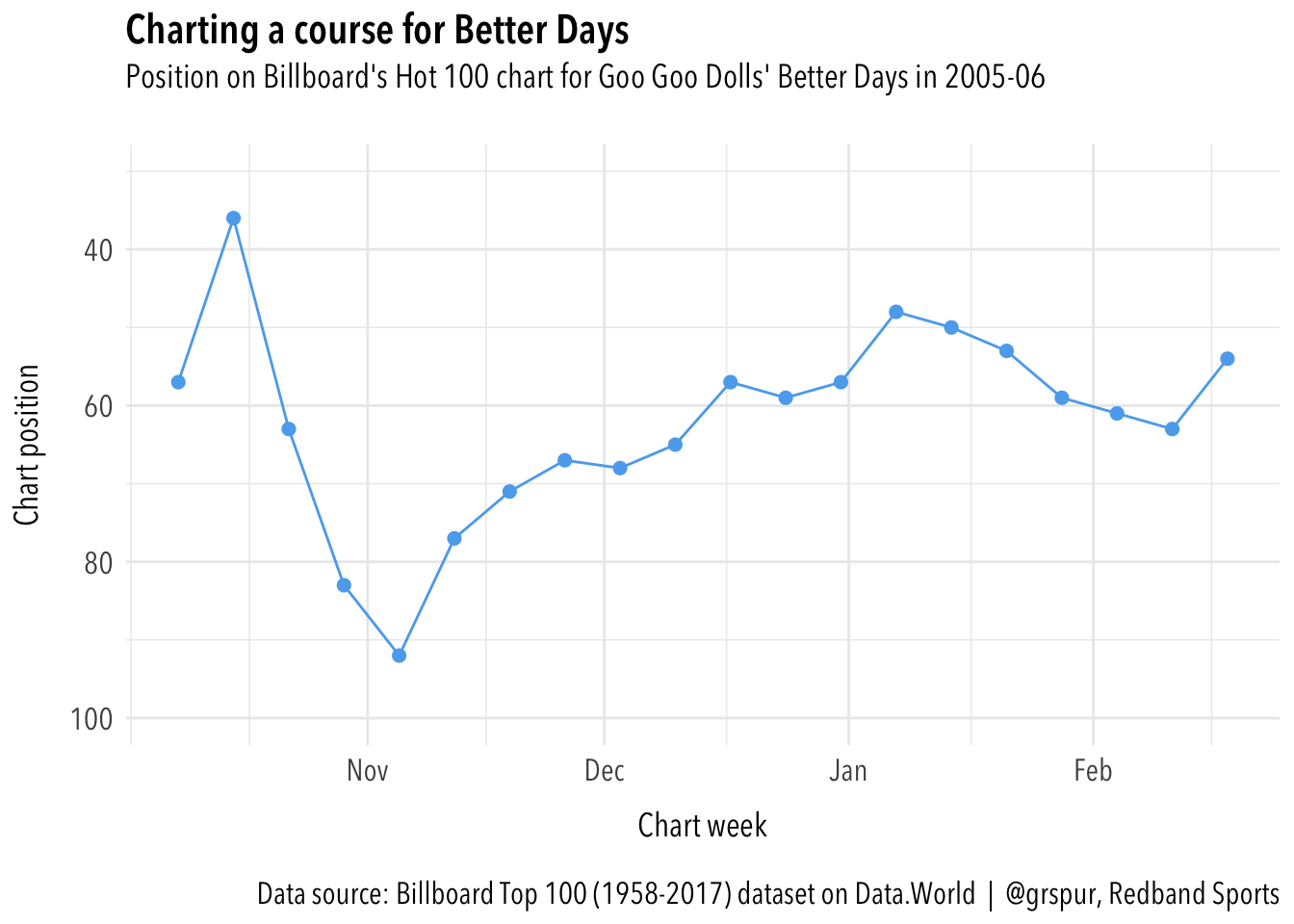 It’s interesting that the song peaked in its second week and was headed out of the chart in early November. But then it found a second wave, riding a new surge back up to No. 48. In the Goo Goo Dolls’ canon, it’s among the eight songs that spent at least 20 weeks on the Hot 100 chart.

Did the second wave through the holiday season in 2005 mean people were embracing it as a holiday song? Well, perhaps not.

Buried in some Wikipedia reference links is a December 2006 interview Goo Goo Dolls bassist Robby Takac gave to MIT’s student newspaper, The Tech. In it, he talked about how Better Days was actually first written for a album of holiday songs issued by Target.

“We got asked to write a Christmas song for a record that NBC and Target were putting out for their stores,” he said in the interview. “We looked on the list and everyone was doing ‘Here Comes Santa Claus’ and just all the standard issue ‘let’s make a rock song out of a Christmas song’ bogocity that happens around Christmas every year.

“At the very last minute, Johnny and I were talking, and I said, ‘You should really try to write a song man cause this is full of standard issue guys playing Christmas songs as a rock band.’ The next day Johnny showed up with that song for a Christmas song, and we went in the studio and it was recorded within two days.”

Wikipedia also says the song was used by CNN and ABC for the networks’ coverage of Hurricane Katrina through the second half of 2005. Takac says in the interview it was used by CNN “as the musical backdrop to the whole (hurricane relief) campaign.”

So Better Days was written as a Christmas song, but perhaps received a push from its off-brand use during a wretched time in U.S. history.

Based on our dataset limitation of chart weeks in November, December and January, Better Days gets credit for 13 weeks. That places the Goo Goo Dolls solidly in sixth place for number of weeks on the Hot 100 chart with a Christmas song.

Top 20 artists by weeks on chart with a Christmas song

Despite the ubiquitousness of Christmas songs in December, very few have actually made it to the vaunted heights of the Hot 100 chart. The marriage of the two lists brings us down to 79 songs by 70 performers.

Boxing Day Shopping Update: Here’s the actual holiday CD on which Better Days appeared, the 2005 Sounds of the Season: An NBC Holiday Collection, a series NBC seems to have released from 2003 to 2005 (with a second 2005 CD called Sounds Of The Season: The NBC R&B Holiday Collection).

You can purchase a used version of both on Amazon for as low as $1.49 ($4.58 for the R&B CD). Better Days is the first track, and Gather Round, which appears to be an original Earth, Wind and Fire song written by Maurice White and producer David Foster, closes the CD. I have not become an Amazon affiliate and please don’t buy 13-year-old CDs unless you are an Earth, Wind and Fire completist.